The Epistemological Paradigm of Islamic Civilization

If this question is answered in terms of “something else,” then that “thing” or that ultimate explanation becomes more essential than philosophy. Then we are led to ask about the essence from which all these philosophical aspects flow. What is it that underlies the many aspects of a civilization?

We can answer this question by saying that it is the law, especially the divine law that underlies any civilization.[2] A civilization is indeed the systematic set of laws that elevates individuals spiritually and advances the society socially and materially. A civilization cannot develop until the more animalistic side of human beings is controlled, and this is accomplished with comprehensive laws.[3] The legal system has a twofold function: (1) to establish what is important and beneficial for human existence, and (2) to protect what is already established, by a set of laws, rules, regulations, and punishments. In Islamic civilization it is the Islamic law (sharīca) that plays this role.

An important question arises in relation to this thesis. If law is the essence of civilization, why do civilizations with advanced systematic laws decline? I argue that they decline because the law itself becomes ineffective for one of two reasons: (1) it is not sufficiently comprehensive to fulfil the needs of humans through space and time, or (2) the people themselves leave the law and respond to their impulses; the law is practical, but may not be practiced in the society.

In contrast to other civilizations such as the Babylonian, Egyptian, Greek, Persian, Indian, and numerous western civilizations, in which the name of the civilization refers to a geographic entity or nation, Islamic civilization refers to Islam as its core. This core, which is Islam, is spiritual and intellectual. It provides man with a universal outlook (weltanschauung) of the origin of the universe, its essence, its goal, the meaning of life, values, the relationship between man and the universe, and the end of this life and what follows.[4]

A question may be raised: how can Islam as a religion operate as the central core of Islamic civilization and specifically Islamic philosophy? Since philosophy is an activity of knowledge, I utilize an epistemological paradigm to illustrate how Islam plays this central role by stimulating philosophers to continue the search for truth.

The Epistemological Structure: The Five Circles

This circle represents the creed of Islam, based on the Qur’an and the traditions of the Prophet Muḥammad œ (sunna). Islamic law (sharīca) is represented in this core that affects all circles in Islamic civilization, not unlike a supreme constitution that influences all aspects of a civilization. This inner circle is distinguished by a number of characteristics. It is holy and absolute; it is perfect, comprehensive, and applicable in all times and places. It is not a subject of human effort to add or modify or eliminate any part of it, but it is a perfect subject of human understanding, reasoning, and reflection, as man strives to form interpretations and make judgments in this life. The Qur’an strongly encourages such efforts.

The second circle is next to the core creed. It is here that we find the Qur’anic and ḥadith sciences, jurisprudence (fiqh), and the foundation and principles of jurisprudence (uṣūl al-fiqh), in addition to what is related to jurisprudence in the form of Islamic literature in the collection of Islamic legal judgments. Also in this circle are interpretations of the Qur’an, understandings of the traditions of the prophet, and the science of recitation of the Qur’an. This circle includes the rules for self-purification (sufism) and the science (based on the Qur’an and sunna) of interpreting dreams. The second circle is concerned with problems and difficulties in all aspects of Islamic culture: religious, social, political, and economic.

The third circle represents the sciences and studies that Muslims consider important, such as Arabic and philology. These subjects are critical to man’s efforts to prove the superiority of the meaning and linguistic structure of the Qur’anic language. We also find here the study of syntax and the semantics of Arabic, in addition to Arabic and Islamic literature. The third circle includes history, genealogy, law, administration, and the organization of the social and economic life of Muslims, in addition to arts in general and particularly calligraphy.

The fourth circle represents mathematics, physical sciences, astronomy, geometry, medicine, pharmacy, agriculture, engineering, and architecture. Although it is far from the core, the fourth circle serves the core (that directs man to understand the laws of the universe) by proving the existence of the creator, the acts of creation, and ultimately His greatness.

Finally, the fifth circle represents theology, philosophy, ways of practicing mysticism (sufi orders), Islamic sects, non-Islamic sects, and knowledge that is translated or transferred from other cultures. Here we find ideas and views that challenge the core itself, such as skepticism, interpretation, and arguments. In this circle we also find non-Abrahamic religions and controversies among religious groups. This circle sometimes provides support to the core, but it may also present challenges that result from the instability of its nature; it becomes particularly active when the influence of the core is weakened and other nations and groups activate themselves in such a way that the intellectual influence of this circle becomes more noticeable socially and politically.

The central circle or the core is complete; only this circle is closed, the other circles are dynamic and have vitality. They are active and open to interact with other cultures and civilizations, but this interaction does not occur indiscriminately. For example, the second circle is cautious in its interaction with other civilizations because it is closer to the core; the third circle opens itself and interacts more freely with other cultures than does the second circle, and does so in a way that permits a number of non-Islamic elements to enter or infiltrate into Islamic civilization. This interaction can be seen in the influence of Aristotelian logic in the study of Arabic, the influence of Roman administration on the Umayyad caliphate, and the influence of Persian culture on Muslims, particularly in methods of administration and governance in the cAbbasid caliphate.

The fourth and the fifth circles interact most with other cultures and civilizations. The influence of the fourth circle on Muslim life is obvious, while the influence of the fifth circle has been very limited. For example, we can see clearly the ways in which Greek philosophy faced severe criticism from Muslim scholars; al-Ghazālī’s book The incoherence of the philosophers [Tahafūt al-falāsifa] is a good example of this. Later, Aristotelian logic faced a similar fate when challenged by Ibn Taymiyya (661–728 AH / 1263–1328 AD). Philosophy did not enter the realm of Islamic civilization until Muslim scholars and philosophers established that logic and reason do not contradict the core, and in fact, reason and logic can even be used to defend the core.

[2] The validity, comprehension, applicability, and simplicity of law are some factors that need to be considered in studying any civilization.

[3] For example, ancient agricultural societies are now considered more civilized than hunter-gatherer societies. Agricultural societies evince more prudent and systematic thought than hunter-gatherer societies and forethought is a distinguishing feature of a civilized society. Such systematic thinking and forethought manifest themselves clearly in the laws of these ancient civilizations. If humans are left to their impulses, society will not progress. Furthermore, a civilized act requires the use of reason to think not only about this life, but also about the hereafter. 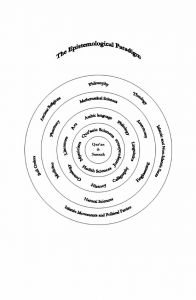