(The World and my Philosophy) 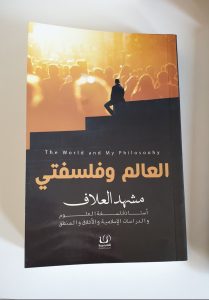 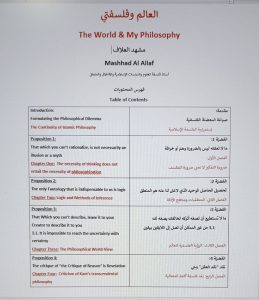 This book explores the topic of love in Literature with an introduction, eight chapters, and a conclusion. Chapter 1 covers Chivalry of Don Quixote compared; followed by a chapter on Ibn Hazm’s Dove’s Neckless; then on to Early Quran translations; Troubadours are covered in the next chapter; then a chapter on Juan Ruiz; followed by a chapter on Stendhal; then Love and economic condition are covered in chapter 7; and finally in chapter 8, Religious dialogue on noble values are covered. The book ends with a  short conclusion on: What is Love? 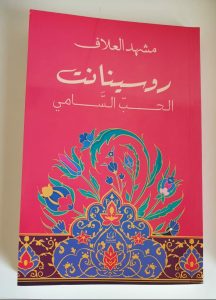 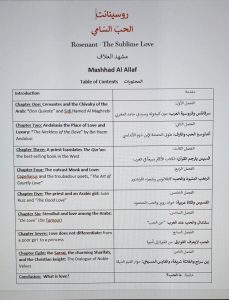 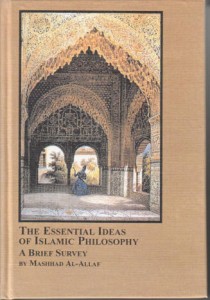 “This book fills a real need, for there has been no compact and readily accessible account of the ideas of these important thinkers that gives convenient access to their principal ideas and arguments – often in their own words …” Professor Nicholas Rescher, University of Pittsburgh

The Essential Ideas of Islamic Philosophy is a treasure-trove for the students looking for an introduction to Islamic Philosophy.
While the texts presented here are challenging, Professor Al-Allaf leads the reader through the difficult but rewarding arguments at the heart of this fascinating material. His approach is to provide two versions of the problem presented: one in the words of the philosopher and the other his own paraphrase and clarification designed to lay bare the structure of the argument. This approach continually holds the reader’s interest.
The author demonstrates not only the centrality of belief in the Qur’an, but also the importance of Aristotle and the commentators of Aristotle to understanding these texts. This is an impressive book.  Dr. Jerome Schiller, Professor Emeritus of Philosophy, Washington University

The Essential Ideas of Islamic Philosophy represents an outstanding and readable introduction to Islamic philosophy.  Written in easy to understand English this book provides an authentic account of the most influential Muslim philosophers.   The author manages to cover the key concepts of a millennium worth of intellectual thought in a concise fashion. This book is ideal for undergraduate and graduate students of philosophy and Islamic studies, as well as for anyone interested in the evolution of Islamic philosophy.
Unlike the many western approaches to Islamic thought, Professor Al-Allaf approaches Islamic philosophy from a distinctly Islamic paradigm. He is, however, cognizant of western thought and provides in table form useful comparisons between, for example, Farabi and Aquinas, Ghazali and Descartes.  He provides his own thesis that the decay of civilization results in a more than a decline in philosophy and not visa versa.  Utilizing charts and diagrams this book, unlike any other, makes difficult concepts in Islamic philosophy easy to comprehend.  Dr. Macksood Aftab, Executive Editor, Journal of Islamic Philosophy, Clinical Associate, Tufts University School of Medicine 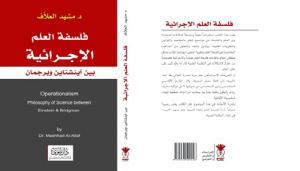 This book presents a detailed discussion of the most influential schools of philosophy of science in 20th century such as Logical Empiricism, Operationalism, and Pragmatism. The book is divided into four unites: the first is on operational definitions, primary and secondary concepts, the work of Einstein on simultaneity, mathematics, and physical reality… etc. The second part covers the philosophy of meaning and some scientific concepts such as space, time, force,…etc. The third part is on the structure of scientific theory and characteristics of scientific laws, and the role of operational definition in the rules of correspondence in a scientific theory. The forth part is on science and metaphysical presuppositions.

Dr. Ayers (expert in Locke’s Philosophy) commenting on one chapter on Cohesion said: “I think that your article draws attention in a scholarly way to important connections in Locke’s thinking about matter that are generally overlooked.”

Locke’s account of the problem of cohesion reflects a serious difficulty in his philosophy because of the way in which he relates it to the problem of substance in his search for something that not only underlies all properties in the traditional Aristotelian sense, but also holds the constituents of matter together. Contrary to common interpretation, this book argues that Locke did not have in mind a metaphysical entity which underlies qualities. Rather, he was more inclined to think that something like a cohesive power is what functions as the “bond” that holds together, not only the qualities of a substance, but its individual corpuscles, and on a deeper level even the parts of the corpuscle. In order to prove this, the study seeks first to clarify the nature of qualities in Locke’s thought; then moves on to address Locke’s account of substance in its relation to the concepts of real essence and cohesion; next the problem of cohesion is examined in detail before, finally, an explanation is offered of why cohesion cannot be described in terms of an act of divine superaddition in Locke’s philosophy.

“The intimate relation that Al-Allaf uncovers between Locke’s treatment of the problem of cohesion and his theory of substance sheds new light on how we are to read this, perhaps most difficulty, element of his philosophy … This new and original reading of Locke takes us some way towards patching his doctrine of substance back into the broad sweep of Locke’s philosophy.” – Dr. John Sarnecki, Professor of Philosophy, University of Toledo

“Professor Al-Allaf’s book … fills an important vacuum in modern thought by drawing attention to an important and frequently neglect problem: the mystery of physical reality … Dr. Al-Allaf shows, through a careful examination of Locke and his contemporary commentators, that the problem of cohesion is much deeper than is normally supposed in the literature, and in fact concerns the internal cohesion of the most fundamental particles of matter … This is an important and provocative contribution to the ongoing debates concerning philosophical naturalism.”- Dr. Omar Mirza, Assistant Professor of Philosophy, St. Cloud State University

I love this book! It is a fantastic introduction to Islam for Non-Muslims and new Muslims wanting to learn the origins, beliefs, and practices of this serene religion. Included are the Islamic perceptions of Allah (God), the 5 Pillars of Islam, Islamic Law, the life of the Prophet (pbuh), history and knowledge of Islam. It is very readable and all the right information is here! Highly recommended.  ( By: D. Fruner)

This book really opened my eyes to a completely new religion, way of living and thinking, and culture. If you are interested at all in Islamic thought, I highly recommend Mirror of Realization. A mix of Islamic philosophy and theology, it manages to explain these complex ideas in easy to understand text yet seems to leave nothing out! I give it my highest regards!! Enjoy!!! (By: C. Boever)

The books is a great introduction to Islam for non Muslims (and for Muslims!). The author doesn’t simply state the basics of the the faith in a textbook manner he actually explains its significance in a philosophical way that really leaves the reader amazed and in love with this beautiful religion. there is an excellent biography of the prophet Muhammad (may Allah be send his infinite blessing on him) that shows that his life was of compassion and mercy and not through the sword. the book also has experts from others scholars of Islam and shows the intellectual tradition of these scholars and shows that the depth in these scholars amazing and poetic words was all out of the love for Islam. for Muslims this is a great book because most Muslims do not actually know there religion. i myself spent a lot of time studying Islamic jurisprudence from the classical Arabic sources but i was amazed to find that i actually learnt new things from the book about my religion. it was not the fundamentals but it was the way the author explained it in such a way that made me ponder and think deeply about basic issues in such away that i had never thought of before. the book really opened my heart. as a Muslim I can tell you the book is really a true and correct introduction to Islam. the author is competent in both Arabic and English and so he gathered many authentic sources in this book to portray an original complete picture of Islam. at a time when it is most needed i think any sincere person interested in learning the teachings of Islam on based on authentic sources should read this book! (By: B. Tahir from UK)