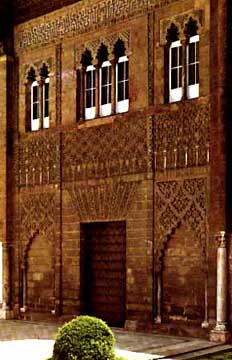 Little is known of Abu al-Baqa' al-Rundi, a poet from Ronda who died in 1285. This poem was written in the hope of gaining aid from Muslims in North Africa to help battle Christian armies. Although the fall of Seville is its theme, the text was actually written in 1267, after the Nasrid ruler Muhammad ibn al-Ahmar surrendered several cities to Alfonso X. The poet refers to events in ancient Arabian and Persian history as well as to the capture of Seville in his attempt to inspire military support. (ORC)

[1] Mashrifi swords were proverbial for their excellence. See a technical Article on making the metal that goes into these swords.

[2] Saif ibn Dhi Yazan was a pre-Islamic Yemenite king and Ghumdan was his castle.

[3] Shaddad was a king of the legendary people of `Ad of Hadramaut, who built a city called "many-columned Iram" (d. Qur'an 89:6).

[5] Qahtan was the ancestor of the South Arabians.

[6] The slayer of Darius was Alexander the Great.